The Celebration of Life Rally was held February 6 & 7 at the Calvary Chapel in Clearwater. The rally, now in its third year, creates awareness of life issues through nationally known speakers and talents to both entertain and educate the community. The Rally is a call to action for people to get involved and to help end abortion. Foundations of Life Pregnancy Centers and Catholic Charities Adoption Services are vendors at the event and this year were asked to bring our Mobile Ultrasound bus for exhibition.

The bus is designed and used to provide free medical, health promotion and social services to the rural poor of eastern and southern Hillsborough. Every other weekend, Foundations of Life Pregnancy Centers equips the bus with a portable ultrasound and parks next to abortion clinics in an effort to reach women in unplanned or crisis pregnancies and to saves lives. Aboard the bus, free pregnancy tests, free limited ultrasound, pregnancy information and life options counseling are provided. Each client is given the opportunity to see their baby and to learn about the abortion procedures, risks, and complications. This truth-telling education leads many clients to make an informed decision to choose life.

Everything was set to go, however, a few days before the event, the bus driver cancelled. Nurse Barb was frantically looking for a replacement. Angelica Herrera, Pregnancy Center Manager at FOL – Pasco, stepped up with previous experience and a CDL license – just in time! Angie, along with her co-pilot Nurse Barb Cowne, got her first opportunity to drive the Mobile Medical Bus. They were off to the Rally to showcase the valuable and life saving medical bus and services.

The route chosen was over the very high and steep Skyway Bridge. The drive proved to be quite terrifying at first. Angie was unaware that the motor was a little too small for a bus this size. As they approached the hump, the bus kept slowing and was soon going only twenty-five miles an hour. They remembered Sister Sara warning…”Don’t let it go below 25 miles per hour.” Soon the bus took on a name…“Tina” as she chugged and chugged up, up and over the hump. Angie and Barb coaxed “Tina” along by rocking back and forth in an effort to give the bus a little more “oomph.” They were talking to “Tina,” telling her “Keep going, don’t give up!” “Keep going, don’t give up!” The trip took longer than expected; the drive seemed endless and was taking forever. They couldn’t wait to be there! Are we there yet?

They made it just in time; Wow, Angie got “Tina,” that beast into Calvary Chapel’s parking lot on time! We’re here….finally! They rolled out the steps and were soon ready for business. Angie and Barb were thanking the Lord Jesus and calling it a miracle!

The Celebration of Life Rally was an amazing and inspiring experience. Visitors to the bus had many questions and were truly impressed by the renovated bus and the portable ultrasound machine. They were able to share success stories about the many saves at the abortion “clinic.” It was great to know that while many pregnancy centers are just getting into mobile ultrasound, Foundations of Life has been doing it for years. It’s success served as an inspiration for others to go mobile.

Time to leave…the way back was even worse! No time to stop for gas on the way, so they stopped at a small gas station. The bus stalled multiple times as Angie kept cranking it back up and inching towards the pump – – there was little room to maneuver and a truck and trailer pulled into the same set of gas pumps. Angie quipped jokingly, “They’re going to have to move or we’ll run over them!” Finally up to the pump, Angie pumped gas and Nurse Barb ran to get a snack. They didn’t have time for lunch and were starving! It would be a long drive back.

Thankfully, the bus started up without a problem and they were back on the road. As they started over the Skyway Bridge, traffic slowed and they noticed it was stopped at the top. The bus chugged along and got slower and slower. Angie and Nurse Barb wondered aloud if the bus would start going backwards if they had to stop. The bus has hydraulic brakes, which are said to be “slow!” Again, prayers for help were wafting toward Heaven. Angie began to call the bus “Tina Turner” and Nurse Barb sang “big wheels keep on turning!” Ah, traffic began moving again as they approached the top of the Skyway, “Okay, look out, we’re not stopping!” yelled Angie as the bus coasted down the Skyway at 60 mph. The two hooped and hollered a bit as they coasted down the hill and finally reached the Catholic Charities Mobile Medical bus’ home at St. Anne’s Catholic Church in Ruskin. Sigh of relief, “We’ve landed in one piece and none the worse for wear!

It may have been just one of many adventures getting there and back but it was well worth inspiring others. Maybe – just maybe, it will inspire the contribution of a Bigger Engine to get the bus where it is going quicker as it continues to meet the needs of those it serves! 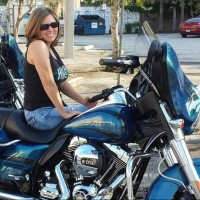